The Sowing and Planting Begins. . .

It's been a busy few days in the garden this week; the Easter holiday sunshine has allowed us to begin planting seeds in pots in the greenhouse, potatoes in one of the raised beds and in potato bags / bins, and 4 new apple trees in large pots outside. We have also had a general tidy up around the garden, and moved one of the raised beds to eventually allow better access to the Anderson shelter, once it's restored and in place.
We also have a second raised bed to move, to allow room for our 'downed Messerchmitt' set piece to be displayed. By chance, some much needed pruning has resulted in a hole between the trees big enough for our 'Battle of Britain' fighter to have crashed through before spreading its wreckage over the ground in the garden. . . however; that's for another day! 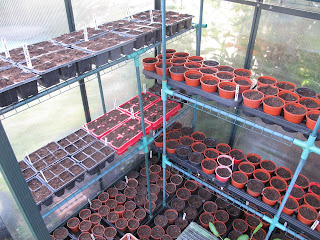 The greenhouse has been filled with pots containing all the seeds that will eventually fill the garden.
This is what we've planted so far: 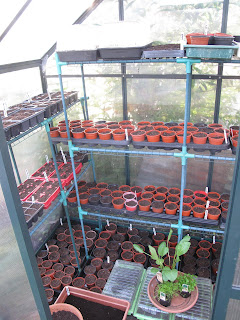 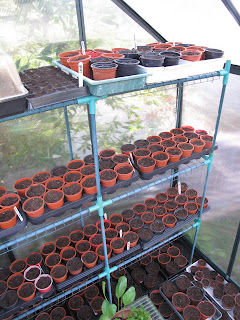 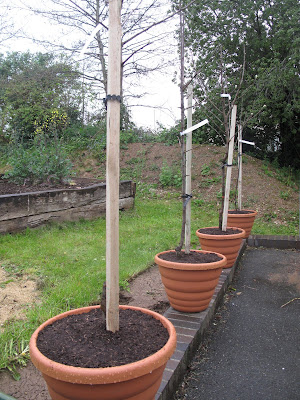 Due to the number of vouchers we managed to collect through the Morrisons voucher scheme last year, we were given an additional 4 apple trees which came free with the order we placed.
These dessert apple trees were planted in large pots, and will line the pathway next to the edge of the garden. 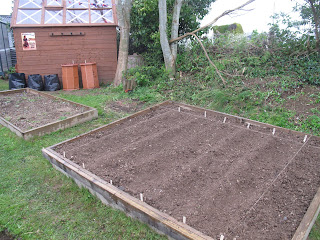 3 varieties of potato were planted in one of the large beds, although a need to rotate crops has meant that a different location had to be found compared to last year. The 3 varieties we are growing this year are: 'Winston' (obviously fitting into our WWII theme!), 'King Edward' and 'Maris Peer'. These were also used to fill the potato bins / bags, as were the varieties 'Rocket' and 'Piccolo Star'.
A foot was left around 3 outside edges of the bed, and this space will eventually be used to plant the sugar snap peas which are currently growing in the greenhouse. 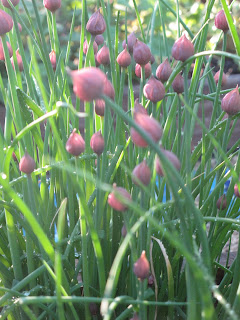 The herb garden is also now beginning to look healthy again; here the purple buds of the chive plants can be seen. 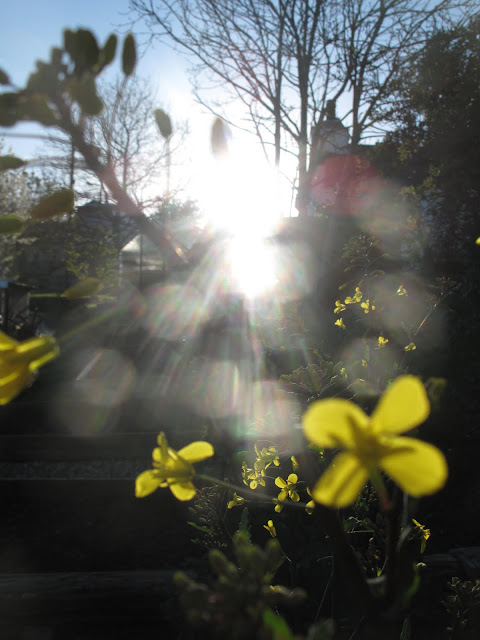 The evening sun sets over the garden on Tuesday.
Posted by 1940s Dig for Victory Garden at Wednesday, April 13, 2011