We had yet another productive day today, and by the end we had almost completed 2 of the remaining 3 side panels; they now only require a final silver top coat tomorrow and they will be finished. 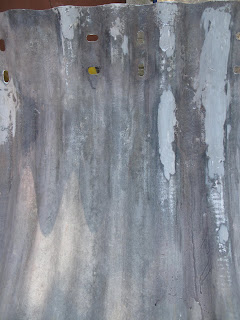 Here the repaired panel has been sanded down in preparation for painting with undercoat. 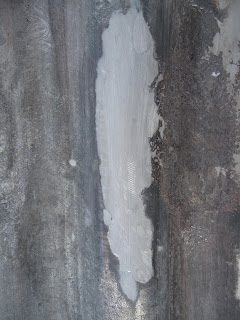 Once painted, these repairs will hopefully be invisible. 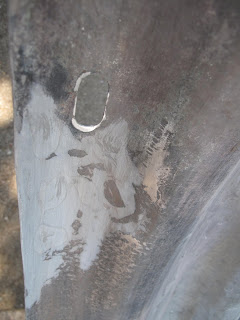 The edge of this panel had rusted away; metal gauze and chemical metal was used to build it back up again. 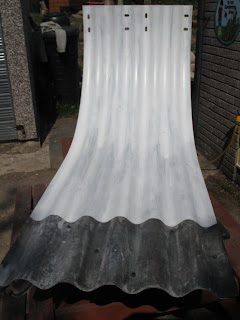 One of the 3 remaining side panels receiving a coat of white undercoat. This is the panel that we had to repair the bottom of as it was too badly damaged with rust. We used a spare piece of corrugated metal from a side panel we acquired, and bolted it into position. 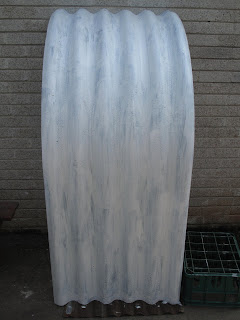 The second of the 3 remaining panels gets a coat of undercoat. 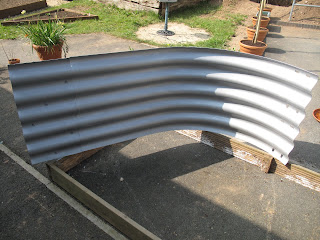 The inside of this panel was also given a silver rust-protecting top coat in the afternoon. The outside surface will be finished tomorrow. 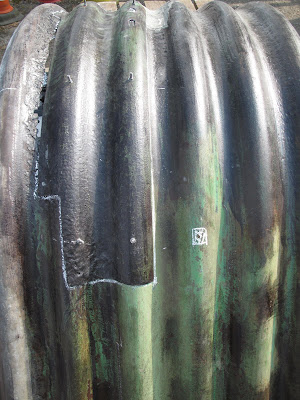 Work then started on the final panel. Again, due to the fact that this panel is badly rust-damaged, a plate has been added to the upper surface to strengthen the side panel and to allow the inside to be repaired more easily. Again, this section was cut, with the angle-grinder, from the spare panel we acquired. Once finally bolted in place, the edges of this patch will be sealed to prevent any moisture seeping in, and causing more rust problems.
We used counter-sunk headed bolts to try and make the heads as flush as possible against the inside of the panel as this will be noticeable once the shelter is constructed - we may skin these over with chemical metal too to disguise them completely from the inside prior to painting.
Also during the day, we found time to plant the two salad beds in the garden, which will provide the school kitchen with a mixture of fresh lettuce leaves, mustard, radish, carrots & spring onions to be used for the children's school dinners.
All in all, it was a very productive day, and we hope to complete the last panel tomorrow. . .despite it being Easter Sunday!!
Posted by 1940s Dig for Victory Garden at Saturday, April 23, 2011