At Elburton Primary School, we are currently in the process of acquiring, renovating and installing a genuine wartime Anderson Shelter in our 1940s-themed school garden. After London, Plymouth was one of the most heavily bombed cities during the 'Blitz', and most houses would've been issued with an Anderson Shelter. Many gardens in the city may still have one, either buried and forgotten about, or used as a storage facility. Anderson Shelters played a key role in keeping families safe during German bombing raids over the city; the details of their design, issue and use are detailed below.

By 1935, British officials were discussing air raid precautions. Little was done, though, until the crisis of 1938, when many European countries were alarmed by Germany's behaviour towards Czechoslovakia. In Britain there was panic as people were afraid of bombing attacks. Evacuation plans were hastily announced; anti-aircraft guns were set up; and deep trenches were dug in London

parks to serve as air raid shelters. The crisis ended after talks in Munich but it had shown that British civil defence was weak.

Experts said that bombing would kill hundreds of thousands of people. So new plans were made for mass evacuation, the construction of large public shelters, and the erection of small units in private gardens ("Anderson" shelters) and inside houses ("Morrison" shelters). 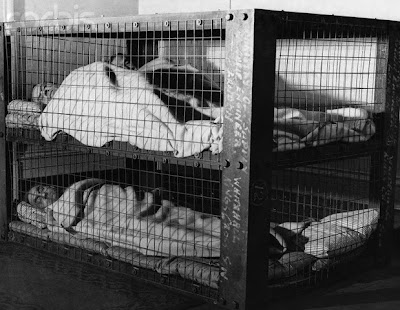 Although the War began in September 1939, bombing of Britain did not start immediately. People developed a false sense of security and were not keen to have shelters. Once heavy bombing began, from the summer of 1940 onwards, shelters became more popular. Railway arches and basemen 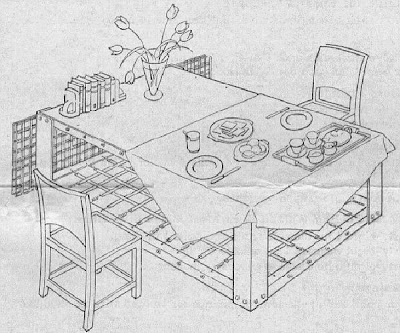 ts were also used and, in London, people slept at night in the Underground Stations and tunnels.

The shelters - big and small - saved the lives of very many people, but there were deaths when large bombs fell directly on shelters. In some cases, many people were killed at once - for example, 64 died at Balham Underground Station when it took a direct hit on 15 October 1940. Late in the War, in 1944 and 1945, the German flying bombs and V 2 rockets were new dangers that caused many deaths.

By the end of the War, German bombing had killed just over 60,000 people in Britain. The experts had over-estimated the strength of the German air force, and the amount of bombs that it could drop. However, many more would have died if shelters had not been provided.

The Anderson shelter was designed in 1938 by William Paterson and Oscar Carl Kerrison in response to a request from the Home Office.

It was named after Sir John Anderson, then Lord Privy Seal with special responsibility for preparing air-raid precautions immediately prior to the outbreak of World War II, and it was he who then initiated the development of the shelter. After evaluation by Dr David Anderson, Bertram Lawrence Hurst, and Sir Henry Jupp, of the Institution of Civil Engineers, the design was released for production.

Anderson shelters were designed to accommodate up to six people. The main principle of protection was based on curved and straight galvanised corrugated steel panels. 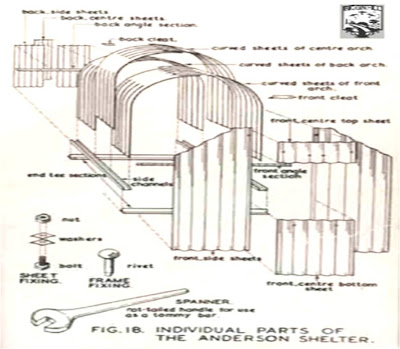 together at the top, so forming the main body of the shelter, three straight sheets on either side, and two more straight panels were fixed to each end, one containing the door — a total of fourteen panels. A small drainage sump was often incorporated in the floor to collect rainwater seeping into the shelter.

They were buried 4 ft (1.2 m) deep in the soil and then covered with a minimum of 15 in (0.4 m) of soil above the roof. The earth banks could be planted with vegetables and flowers, that at times could be quite an appealing sight and in this way would become the subject of competitions of the best-planted shelter among householders in the neighbourhood. 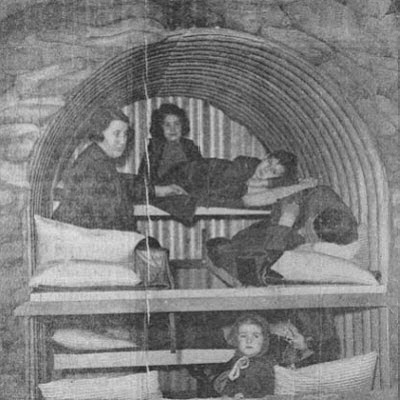 The internal fitting out of the shelter was left to the owner and so there were wide variations in comfort.

Anderson shelters were issued free to all householders who earned less than £250 a year, and those with a higher income were charged £7. 150,000 shelters of this type were distributed from February 1939 to the outbreak of war. During the war a further 2.1 million were erected.

At the end of the war in Europe, households who had received an Anderson shelter were expected to remove their shelters and local authorities began the task of reclaiming the corrugated iron. 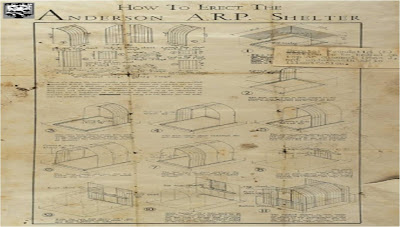 Householders who wished to keep their Anderson shelter (or more likely the valuable metal) could pay a nominal fee.

Because of the large number made and their robustness, many Anderson shelters still survive. Many were dug up after the war and converted into storage sheds for use in gardens and allotments. Maybe you have one at the bottom of your garden. . .