The Role Of The A.R.P. Wardens

As part of our 'Dig For Victory' garden display this year, we are planning to highlight the role played by everyday civilians on the Home Front during WWII, to enable the children to better understand how the whole communies were effected by the country being in a state of war, and the various roles these people carried out.

One of the most important jobs within any community, whether it be within a city or rural community, was that of the A.R.P. Warden. They had many varying roles, and different branches within the A.R.P. carried out these duties, mostly after a long day at work. During air raids, the A.R.P. Wardens worked throughout the night to ensure the safety of the communities they were in charge of.


How It All Began

When Adolf Hitler began making speeches in August 1938 suggesting that he was going to invade neighbouring countries, the British Government feared that there would be a war with Germany. Neville Chamberlain ordered Air Raid Precautions Wardens (A.R.P.) to be mobilized.

These men and w 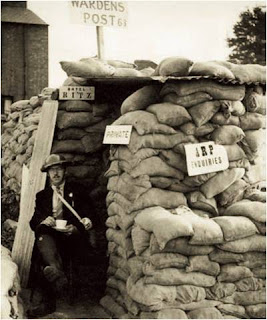 omen were volunteers and, at first, they wore their own clothes, their only protection being a steel helmet. Once the war started they were issued with uniforms - a one piece dark blue boiler suit, a steel helmet and rubber wellington boots. They carried their gas masks and a whistle at all times.

It was the job of the A.R.P. wardens to try and ensure the safety of the public before, during and after an air raid. They were responsible for enforcing the blackout and for arranging the sounding of the air raid sirens. It was also their job to make sure people took shelter once the siren sounded.

In rural communities, A.R.P Wardens often warned people about air raids by riding their bicycles through the village streets, blowing short blasts on a whistle. If poisonous gas was suspected, then a wooden rattle was used. Fortunately, many rural communities were never deliberately bombed. However, during the early years of the war, enemy raiders would often fly over these villages on their way to places such as Bath or Coventry, and this kept the wardens at a high state of alert.

When the blackout regulations came into force it became an offence to show a light after dark and the cry of 'put that light out' became the wardens' catch phrase.

When bombs did fall, the A.R.P. also had to deal with any unexploded bombs. As many as one in ten bombs dropped on Britain either failed to explode, or had timers fitted which delayed their detonation, sometimes for days after they were dropped. If an unexploded bomb was discovered, the A.R.P. would seal the site and evacuate the area. They would then send for the Bomb Disposal Unit, who would diffuse the bomb. 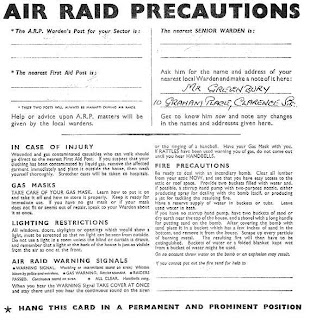