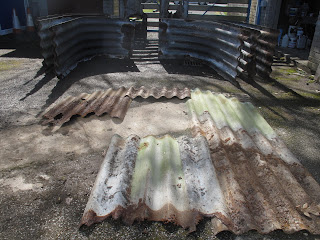 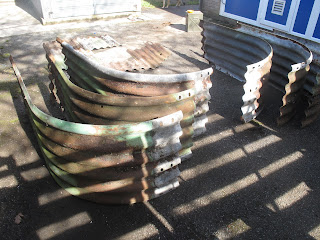 On Sunday 13th March, we began the restoration work on our Anderson Shelter. Firstly, we took all the panels from their storage shed, laid them out on the floor and photographed them to record what we had before any work commenced.

Once photographed, we stood the 6 side pannels together and placed a few bolts in to temporarily hold them together. We wanted to see how tall the shelter was once built, and see how much metal had rusted away from some of the pannels. These shelters were burried up to 3 feet in the ground, so often the lower parts of the pannels are quite badly corroded. 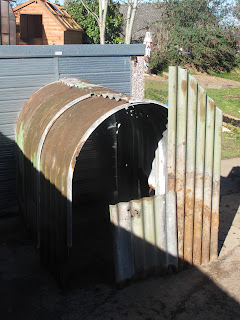 We decided that, considering the rusted condition of the lower edges of the side panels, it would be necessary to remove 8 inches from the bottom of the panels. Obviously, this would reduce the overall height of the shelter, and would mean that a modified base would have to be constructed to make the height up again, but seeing as the original base framework did not survive in the ground, a new one would have to be manufactured anyway. 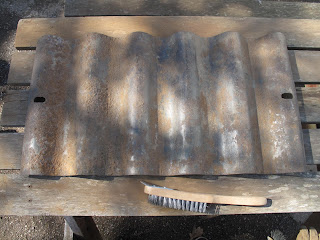 With the decision made, we began to wire brush the rust from the first panels. This was a big job, as quite a lot of rust had accumulated after 70 years in the ground! This panel (right) forms the top section of the doorway. It took about an hour of wire-brushing to get it looking this good! Next, this panel will be rust-treated/proofed and painted. Luckily, there were no rust holes in this panel; however, the majority have holes to deal with, and some are much worse than others.
The picture below gives an idea of just how badly rusted some of the pannels are. 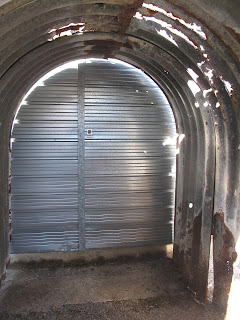 These holes will obviously require mending. Unfortunately, due to the age of the shelter, the corrugated steel pannels they are made from do not exist to the same specifications today, so either another shelter has to be found and its panels used to replace these damaged ones, or we will have to mend the ones we have.
This will be done in a similar way to the methods used by garages when repairing car bodywork.
Idealy, some other doner panels will be aquired. . . 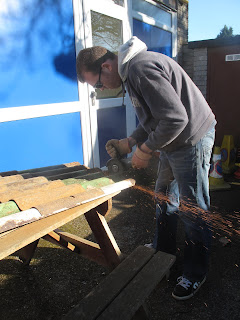 Here (right) the 8 inches of metal/rust is being removed from the lower edge of the side panels. 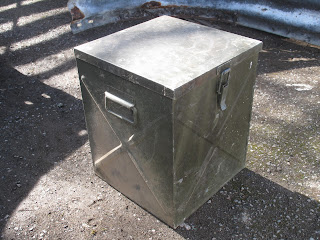 Another interesting find from the shelter's original location was, what looks to be, the original Anderson Shelter toilet from WWII!! 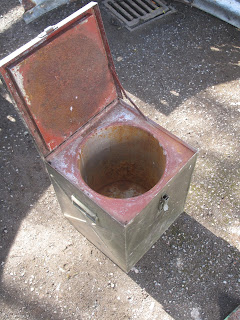 At first, we thought this was an air raid shelter heater, but when we lifted the lid, we had quite a surprise!! 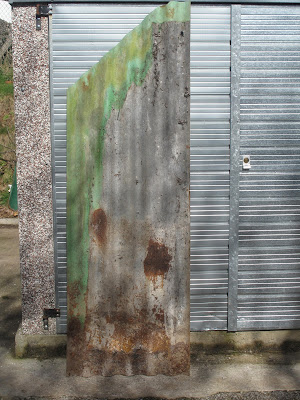 Here, the right-hand front panel can be seen. It's in relativley good condition, with only a couple of small rust holes that will need repairing. Unfortunately, the lower half of the left-hand panel was completely missing, having rusted away many years ago. We will either need to manufacture a new one from a similarly corrugated modern material, or alternatively source a replacement panel. The 3 rear sections were also completely missing, and will need replacing.
We now plan to continue with the rust removal, and begin to repair the damaged panels.
Watch this space!
Posted by 1940s Dig for Victory Garden at Monday, March 14, 2011