70 Years On; Memories of the Plymouth Blitz

This interesting report appeared in 'The Herald' on Thursday, March 24, 2011.

Jessie Can Vividly Recall the Bombing

RESILIENT is a word which blitz survivor Jessie Durant thinks best describes the people of Plymouth during the punishing German bombing. Despite her years, the 99-year-old remembers the time as clear as day.
And one aspect of the time which stands out for Jessie is the determination and perseverance of Plymothians, whether it was the children who didn't miss a single day at school, or the shopkeepers who stayed open despite their shops suffering bomb damage.
"Life went on," said Jessie with a smile. "It had to. Times were hard and we all lived as we could. I had a coat made out of two old Army blankets. Gypsies on horse and carts would also come by selling bits and pieces. We never asked where they got their stuff but I remember buying three rolls of lino. I remember we all read the newspapers to look at the adverts for recipes."

"Food was short and we lived on rations. One recipe I remember was pastry made with liquid paraffin.
Surprisingly, it was really good. I'm not sure why it didn't really take off."

And Jessie knew just how hard life could be. Her husband, Walter, was a watchmaker and jeweller and ran his shop 'Durant's Watchmaker and Jeweller' on Union Street opposite the Palace Theatre.
During one of the Blitz raids a German bomb hit the next door property – which was also where the couple and their four-year-old daughter Anne lived – and blew off their roof.
Instead of closing up the shop Walter – who was also an air raid warden in the city – kept working at the site.
"He would stand in the shop working while holding an umbrella over his head because the rain would pour down," said Jessie, who lives in Roborough.
"There were often buckets and pots and pans everywhere to try and catch the rain. Others who weren't as fortunate would sell their wares from Nissen huts in the street."

Following one particular raid, when Walter was on warden duty, he feared Jessie and Anne had been killed after seeing flames in the direction of Union Street. Fortunately the two were safe in the air raid shelter at the bottom of the garden but Walter ordered them to evacuate from Plymouth for their own safety. They moved to Salcombe temporarily.

But the sights and sounds of the war were – and are to this day – still with Jessie.
"You didn't hear much when a bomb dropped," she said. "You just heard a 'shhhhhhhh' sound. When they did go off it was so loud you didn't really hear it. It's difficult to describe. Everything just shudders."

Jessie said she felt "sad" at the destruction of Plymouth and said she hopes no-one will ever see such a time again.
"I'm glad it's not on now but it was such a long time ago, I just hope lessons have been learned," she added.
"I was very sad Plymouth was devastated. I don't think the new Plymouth is anything like the old Plymouth." 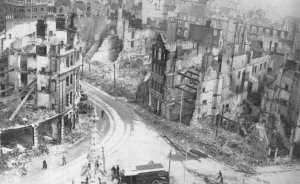 With the top of St Andrew's Cross in the foreground, this was the scene at Spooner's Corner the morning after a German air raid. Spooner's is on the left, Old Town Street in the centre and Whimple Street on the right. 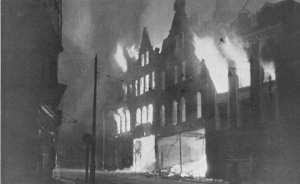 The fires raging at Drake Circus. 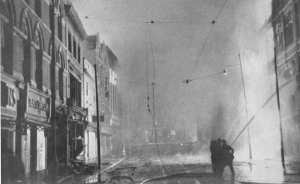 The scene as firemen try to put out the fires in Old Town Street, just up from Spooner's Corner.
Posted by 1940s Dig for Victory Garden at Saturday, March 26, 2011