Work continued today on the remaining 3 panels; by the end of the day, 2 were almost ready for painting with only a small amount of filling/sanding left to do. These will be finished tomorrow, and we will begin to restore the final side panel.
These pictures show today's progress: If nothing else, we've succeeded in making a dog shelter!! 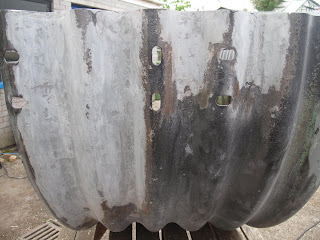 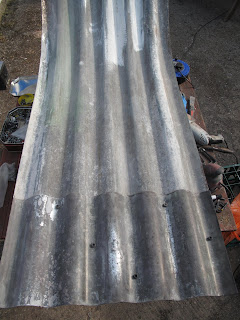 This badly damaged panel was repaired with an additional plate, which was bolted into position, after being cut from a spare piece of corrugated material. 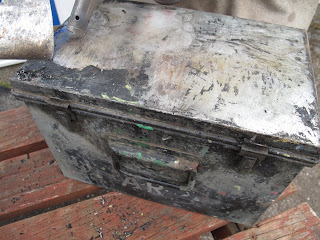 Another job we decided to start was the restoration of an original A.R.P. First Aid box. This will eventually house an mp3 played to play period music in the garden! We began to strip the paint off, which had become badly worn over the years. 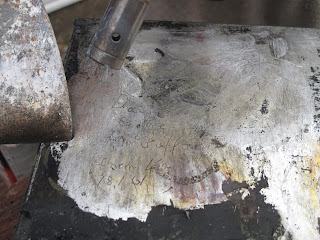 After stripping the paint off with the blow torch, we discovered that someone had obviously used the box after the war as a school box / lunch box at some point, as a name, class and date were clearly visible, scratched into the upper surface.
The inscription reads 'David George McGaffog; Form 4a; 18/6/ ? ' 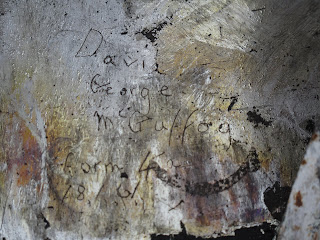 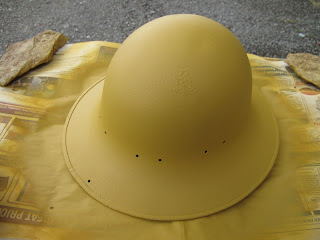 The Fire Watcher's helmet, which was rust-proofed yesterday, also received a coat of filler primer in preparation for painting. This will be sanded down with wet & dry, re-primed and painted with a light grey top coat (original colour) with the letters 'SFP' (Supplementary Fire Party) stencilled in white on the front.
Posted by 1940s Dig for Victory Garden at Friday, April 22, 2011