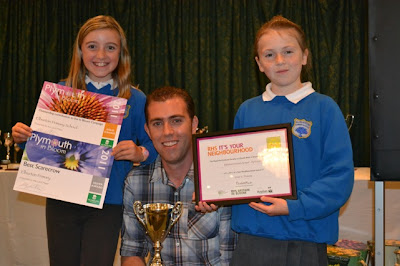 On Friday 30th September 2011, representatives from Elburton Primary School attended the Plymouth in Bloom awards presentation at the Duke of Cornwall Hotel, Plymouth.
Guests included residents, businesses, schools and community groups, all of whom have worked hard to create a blaze of colour with floral displays around Plymouth this year.
The Lord Mayor Peter Brookshaw presented the awards to those who impressed the local judges in categories including best garden, school garden, window box and allotment.
Councillor Mike Leaves, Cabinet Member for Community Services (Street Scene, Waste and Sustainability) and Chairman of the Plymouth in Bloom Committee, said: "There has been some wonderful work across the city this year with people making a huge effort. I'd like to thank everyone who's taken part in Plymouth in Bloom and helped continue to make the city a great place to live and work." 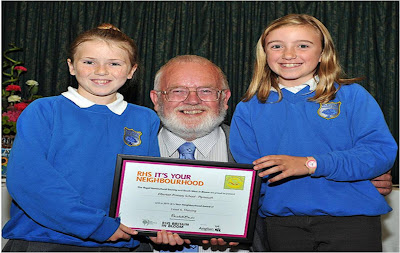 The winners of the Royal Horticultural Society's South West in Bloom 'It's Your Neighbourhood' competition were presented with their awards at the beginning of the evening. This year there were 35 Plymouth winners, a big increase on previous years. Elburton were presented with one of these RHS awards, along with other community projects including the Maker View Project, West Hoe Flats, Plymouth Barbican Association (The Elizabethan Garden), Jigsaw Garden and Friends of Efford Valley.
Earlier this month Plymouth picked up gold in the large city category in the South West in Bloom and a silver-gilt award in the coastal city category at the prestigious Britain in Bloom ceremony. 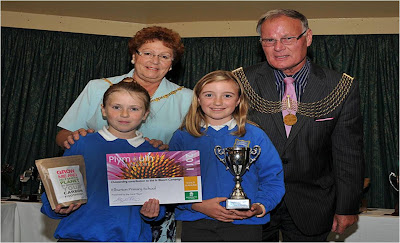 The next awards to be announced were within the schools category. Due to Elburton Primary School's support of both the Plymouth in Bloom Awards and the RHS South West in Bloom, we were honoured with a special award within the 'Best School Garden' category. Staff and pupils were honoured for their 'Outstanding Contribution to the 'In Bloom' Campaign', and received a special trophy for our 'Dig for Victory' garden.
Finally, Elburton received a Silver award within the 'Best Scarecrow' competition, being narrowly beaten by Lipson Vale Primary School. 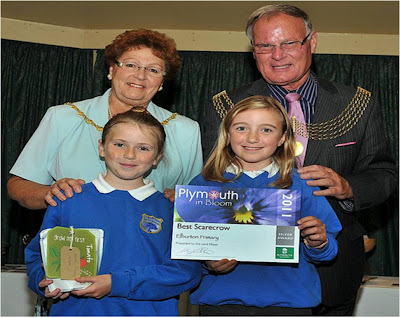 The children who attended very much enjoyed their evening, and Elburton were very pleased with the outcome of the evening! 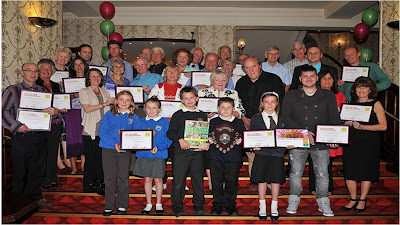 The full list of winners on the evening is detailed below:
Posted by 1940s Dig for Victory Garden at Sunday, October 09, 2011